One of the best in the business of true crime, M. William Phelps

There’s a certain familiarity with the sociopath one encounters after writing 30-plus books about one-off murderers and serial killers. Interviewing scores of these people, one tends to develop an almost inherent, instinctive sense for how they go about manufacturing and inventing lies, carefully orchestrating each one, and then inserting those lies into public discourse.

Patricia “Pat” Olsen—the subject of “Murder in Massachusetts,” the second story in Murderers’ Row, my first collection of true-crime for WildBlue Press—is one of those people.

The sociopath (which I classify Pat as), if he or she tells a lie long enough, believes the lie. We’ve certainly heard this clichéd argument before. And yet when I say this about someone like Pat Olsen, I mean it literally, not in a general sense. Moreover, in Pat’s case, she takes the deception a step further: projecting the idea that certain incidents, conversations and entire scenarios either did or did not take place—and, at the risk of using sarcasm to make a point, because she’s shouted those lies from the rooftop of her prison cell for over a decade, well, we should believe them. You know, drop everything and run to Pat’s side, begging for forgiveness, admitting we’ve been wrong about her all along.

“Murder in Massachusetts” is a story I wrote almost a decade ago, updated and polished for Murderers’ Row. Since I first wrote the story, I have commented on a few Investigation Discovery and Oxygen Network shows about the case. Within the context of those shows, proudly (I might add), I chastised Pat Olsen pretty damn hard. Why? For one, she deserves it. Two, she’s a cold-blooded murderer. Worst, she cowardly employed her children to carry out her evil plans and then cried the proverbial “poor me, poor me” line of defense many others claiming to have been wrongly accused bark after having been caught.

For years now, Pat has been promoting this argument to anyone who will listen that she has been erroneously convicted of this murder you will read about in Murderers’ Row. That her two “broken,” drug-addled children committed the deed themselves and then conspired to brand her (during her trial) a cunning, devious, manipulative, malicious mother and wife, bent on hiding her own financial collapse, subsequently wanting to see her husband dead so she could live happily ever after off of her hubby’s lifelong hard work, which had amounted to about $180,000 in total death benefits.

It is all bullshit, of course. Absolute nonsense. A totally invented narrative by a woman who thought she was smarter than everyone else—which leads me back to the lies.

In May 2016, I received a letter from Pat, who is now 52 years old. She wrote to me from the Massachusetts Correctional Institution (for women), in Framingham, Massachusetts, her home since being incarcerated in 2006. This letter is, I’m told, one in a long line of missives she has been sending to lawyers and others in search of pro bono representation to mount a final appeal. I am including scanned images of the letter in its entirety, but wanted to briefly clear up a few of Pat’s foolish comments. 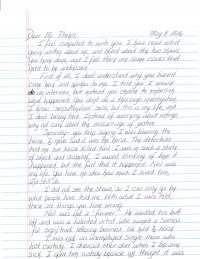 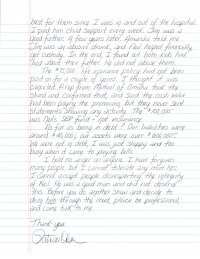 Note the opening of Pat’s letter: “I have read about what you’ve written about me and heard about the two shows you have done and I feel there are some issues that need to be addressed.”

I love the “read about” and “heard about” source material Pat is basing her comments on. It tells me what she is willing to accept as truth.

Anyway, Pat goes on to spout another (among many) categorical falsehood: “I don’t understand why you haven’t come here and spoken to me.”

I reached out to Pat and her mother several times before writing the story. Both told me (repeatedly) that Pat did not want to talk. I only approach convicted murderers a few times and then I’m done. Most who don’t talk—and many do—routinely come back later when they realize they should have spoken up, and claim I never contacted them. In Pat’s case, it’s a ridiculous accusation disproven by letters I’ve sent to her and conversations with Pat’s mother I have on tape.

What about Pat’s “blame the horse” argument?

Total bunk. Absolute BS. Early on, the idea that a horse Pat and her husband owned could have trampled her spouse to death came up only because her husband’s killer tried staging the scene to make it appear as such. But, as you read in her letter, she was in such a “state of shock and disbelief” when cops came to the house she could not have possibly been thinking about how her husband died and thus could have never speculated about the horse.

She remembered specific times and what she did the previous night, however.

All I can say to that is: LOL.

Then she goes on to “correct” me by saying Neil Olsen, her husband, the victim in this case, was “not a farmer.” As if to imply that I have called Neil a farmer and not portrayed him on the shows I’ve commented on and in my story as the person he was. Let me just say: Every time I have spoken about this case, I have made it clear Neil Olsen was both a small business owner (sign maker) and exceptional human being.
There’s no reason to go tit for tat with every accusation in the letter. My story and my expert analysis of this case on television and radio are backed by facts. Please read this letter again after you’ve read my journalistic account of the case in Murderers’ Row and you’ll see how convicted murderers love to play with the facts of a case, manipulate and shape them, and try to blind the public from seeing the true sociopaths they are. 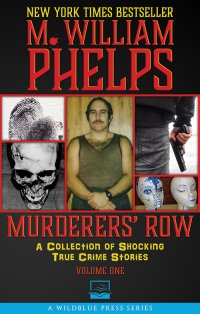 “Patricia Olsen was the murderer; [her son] was her weapon,” Berkshire (Massachusetts) District Attorney David F. Capeless, the lead prosecutor in Pat’s case, told The Berkshire Eagle as recently as 2013.

M. William Phelps is the New York Times bestselling author of 33 nonfiction books. His latest, Murderers’ Row, is available from WildBlue Press. In early 2017, look for Phelps’s next release, Don’t Tell a Soul; and, in August 2017, comes a project five years in the making, a true-crime memoir, Dangerous Ground: My Friendship with a Serial Killer. 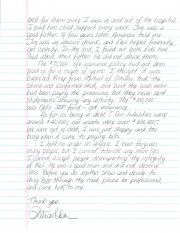 There’s a certain familiarity with the sociopath one encounters after writing 30-plus books about one-off murderers and serial killers. Interviewing scores of these people, one tends to develop an almost inherent, instinctive sense for how they … END_OF_DOCUMENT_TOKEN_TO_BE_REPLACED

MY NEW BOOK, TARGETED, IS ABOUT A former Oglethorpe County Georgia sheriff’s deputy who claims to have been framed for a particularly brutal—for a female killer—murder. By whom, you ask? A few of her former fellow law enforcement officers—which … END_OF_DOCUMENT_TOKEN_TO_BE_REPLACED 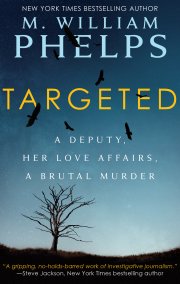 Maybe the youngest son of a violent criminal named Hoggy Thompson was born a beast. Maybe rage was beaten into him. One thing was certain, by the time he reached manhood, Jerry Thompson was a savage killer. He had no conscience about rape, child … END_OF_DOCUMENT_TOKEN_TO_BE_REPLACED

Losing a young daughter to murder is the worst nightmare that a mother could possibly imagine, but what if the killer was her son? Charity Lee was thrust into this unimaginable situation when her 13-year-old son Paris murdered her beloved 4-year-old … END_OF_DOCUMENT_TOKEN_TO_BE_REPLACED

The Encyclopedia of the Ted Bundy Murders lists the names of hundreds of people involved in the case as well as dozens of locations where significant events occurred.  Being the final installment in a five-volume series, this veritable “Who’s … END_OF_DOCUMENT_TOKEN_TO_BE_REPLACED

Author Orlando (Ori) Spado honestly recounts his humble beginnings from the small town of Rome in upstate New York to becoming known as The Mob Boss of Hollywood.  A candid account documenting his fall from a well-known Hollywood fixer mixing with A … END_OF_DOCUMENT_TOKEN_TO_BE_REPLACED

On a cold Southern night in 2013 under a full moon, 20-year-old Heather Elvis parked her car at a boat ramp along the Intracoastal Waterway and was never seen again.  The disappearance of the beautiful, vivacious hostess at a … END_OF_DOCUMENT_TOKEN_TO_BE_REPLACED 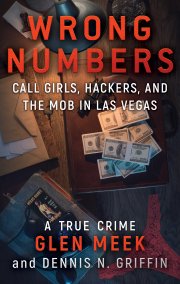 "Wrong Numbers is an intriguing and well-researched crime story detailing the intersection of big money and quick sex in the city that contains a lot of both." - Jack Sheehan, author of Skin City Was a hacker diverting phone calls meant … END_OF_DOCUMENT_TOKEN_TO_BE_REPLACED 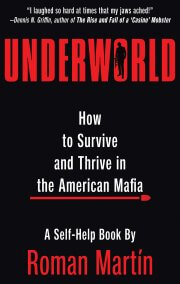 Have you ever fantasized about being able to do whatever you want, when you want, and to whom you want? Or perhaps you’ve dreamed about never having to take crap off anyone ever again? If so, then the Mafia could be the perfect new profession for … END_OF_DOCUMENT_TOKEN_TO_BE_REPLACED 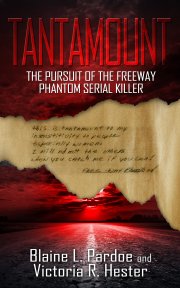 In 1971 and 1972, a deadly predator stalked the streets of the nation’s capital.  His targets, young girls who he kidnapped, raped, and left their remains along busy roadways in plain view.  Some of his victims he held captive for days, … END_OF_DOCUMENT_TOKEN_TO_BE_REPLACED 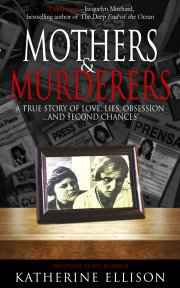 "A dark jewel" - Jacquelyn Mitchard,  bestselling author of The Deep End of the Ocean Mothers & Murderers: A True Story of Love, Lies, Obsession … and Second Chances takes readers on a wild tragicomic ride from the criminal courtrooms of … END_OF_DOCUMENT_TOKEN_TO_BE_REPLACED

Marty Croft has it all. A beautiful wife, and a successful career as a commercial artist. That is until his past comes back to haunt him. Enter Gordon Shamus, the psychotic son of Marty’s former gangster boss. After Marty’s wife is kidnapped, he … END_OF_DOCUMENT_TOKEN_TO_BE_REPLACED

Losing a young daughter to murder is the worst nightmare that a mother could possibly imagine, but what if the killer was her son? Charity Lee was thrust into this unimaginable situation when her 13-year-old son Paris murdered her beloved 4-year-old … END_OF_DOCUMENT_TOKEN_TO_BE_REPLACED

The Encyclopedia of the Ted Bundy Murders lists the names of hundreds of people involved in the case as well as dozens of locations where significant events occurred.  Being the final installment in a five-volume series, this veritable “Who’s … END_OF_DOCUMENT_TOKEN_TO_BE_REPLACED

Maybe the youngest son of a violent criminal named Hoggy Thompson was born a beast. Maybe rage was beaten into him. One thing was certain, by the time he reached manhood, Jerry Thompson was a savage killer. He had no conscience about rape, child … END_OF_DOCUMENT_TOKEN_TO_BE_REPLACED