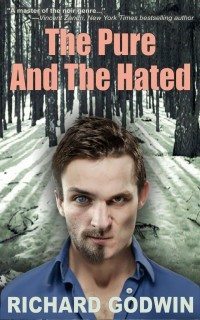 There is much that is Gothic in The Pure And The Hated, my novel about the past, about revenge and lawlessness. In many ways revenge may be seen as lawless justice.

As I examine what horror fiction means to us and how it relates to crime fiction, I want to trace its roots. I want to show that the two genres are not that distinct.

In the latter part of the eighteenth century there was flowering of Gothic literature in England that ran alongside the Romantic Movement. They had one overriding thing in common: the treatment of the irrational in literature, from the graveyard poetry of the Romantic poets to the horrors contained in the early Gothic novels, among them the influential work by Matthew Lewis, The Monk. The novel concerns the struggle between maintaining monastic vows and the fulfillment of personal ambitions of its main character, the monk Ambrosio. And it exposes the strength of the irrational as Ambrosio is driven to the breaking of his vows, then to sexual obsession and rape, and finally to murder.

If you place this novel and the other works being written in the historical context of the Age Of Reason we can see a backlash against the idea that we are ruled by reason. This was the era in which early Gothic works like Horace Walpole’s The Castle Of Otranto were written and the Romantics explored their concepts of the imagination. Byron wrote a Gothic piece in Manfred and Shelley himself wrote Zastrozzi while his wife wrote one of the first great horror novels in Frankenstein.

It is as if unreason, which had been repressed throughout the Enlightenment period, erupts in the fantastic art of Sade, Goya, and horror fiction. Michel Foucault commented in Madness and Civilization that the classical period had confined:

“not only an abstract unreason but also an enormous reservoir of the fantastic… One might say that the fortresses of confinement added to their social role of segregation and purification a quite opposite cultural function… they functioned as a great, long, silent memory.” 1.

The dialectic is between reason and unreason. What drives Mary Shelley’s novel is the desire to be united with the other. The monster is Frankenstein’s lost selves, parts of his identity he has severed and become alienated from. Carl Jung believed we project those parts of our identity we do not like outwards. It is what he called the shadow, and I believe horror fiction operates by challenging the reader with the shadow.

In the Unites States similar things were happening. Charles Brockden Brown wrote a series of Gothic novels based on the subversion of rationality. His novel Edgar Huntly, Or Memoirs Of A Sleep-Walker encapsulates this. Similarly Poe’s stories use enclosures to express psychic terrors and primal desires.

But what is the difference between terror and horror?

It was Anne Radcliffe, author of The Mysteries Of Udolpho, who first made a distinction between terror and horror in literature.

She wrote that terror is characterised by “obscurity” or indeterminacy in its treatment of potentially horrible events and it is this indeterminacy that leads to the sublime. She said that the sublime “expands the soul and awakens the faculties to a high degree of life”. Horror “freezes and annihilates them”. Typically terror is described as a feeling of dread and anticipation preceding the horrifying experience. Horror is described as the feeling of revulsion after something frightening is experienced.

Kurtz had seen it all at the end of Heart Of Darkness. He was horrified by what he had discovered he was capable of.

In these articles I will be looking at some novels in more detail and seeing how horror operates. Horror literature exists at the edge of the body of the rational that holds society together, and as such subverts the kind of certainties that other genres rely on for their narrative cohesion and representation of reality, for horror shows the reader a distorted version of reality, a reflection that becomes familiar as the reader recognises the face in the window and realises it is the one he dreaded seeing.

There is much evasion of the self in The Pure And The Hated. There is also much about split personality in the novel.

Due to Sullivan’s extensive writing about Ted Bundy (which has produced six books), he’s become a sort of magnet over the years, drawing out many people who were part of the Bundy story, but have otherwise kept a low profile over the decades; and … END_OF_DOCUMENT_TOKEN_TO_BE_REPLACED

Volume One The Early Years In 1944 Brooklyn, newborn Michael J. Hardy is rejected by his mother so she can run with gangster Bugsy Siegel, Hardy’s godfather. Shirley Rook rose to the top of the criminal ranks. As the Queen of New York City … END_OF_DOCUMENT_TOKEN_TO_BE_REPLACED

This is the true story of Carmine Imbriale – a gambler, a brawler, a bandit, a bookie, an enforcer. For two decades, Imbriale was a street-level operative in one of the most violent crews in the Colombo Family, and he endeared himself to some of the … END_OF_DOCUMENT_TOKEN_TO_BE_REPLACED

Ten must track down and stop rogue scientists behind the development of criminal technology in THE HUMANZEEE EXPERIMENTS, the next installment of The 'Ten' Mystery Series! The International Security for Technological Innovations, a federal … END_OF_DOCUMENT_TOKEN_TO_BE_REPLACED

A 1986 family tragedy propels this gripping true crime debut as a mother searches for answers in the shocking murder of her husband—and conviction of her son. For years, Cherie struggles to overcome the consuming grief she suffers from the loss of … END_OF_DOCUMENT_TOKEN_TO_BE_REPLACED

It was a dreary winter afternoon in Ayer, Massachusetts, a quintessential New England town, the type which is romanticized in Robert Frost's poems. But on January 30, 1979, a woman’s scream was heard piercing the northeast tempest wind. In an … END_OF_DOCUMENT_TOKEN_TO_BE_REPLACED